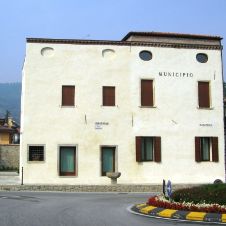 Galzignano Terme is a very ancient town originating during the Neolithic Age. Thanks to the archeological discovery of a boundary stone it is clear that important villages were already settled in this territory since II century B.C.
Right after the Middle Ages period (1000 A.D.) many noble families of the area were used to rest in the hills and valleys of this territory, and for this reason they built many villas in the town.
Galzignano is well-known in the world for its thermal area, landscapes and its historical importance.
The center of the town is located on the gentle slope of the eastern part of the Euganean Hills (Colli Euganei), where there is also level ground.
Around the flat part of the territory are woods which are mainly used for agricolture whereas in the eastern part (Civrana locality), there are sources of thermal springs used by hotels for thermal therapies including muds.
The history of Galzignano is connected with the history of Padova, Este and Venice.
In that period many villas were built including: Villa Rizzoli (1400 A.C. and rebuilt in 1700 A.C); Villa Saggini (end of 1700 A.C.); the pretty little Villa Boggian next to the Church and Villa Benedetti. Not so far from the center of the town we also find Villa Civrana, propriety of the Count Emo Capodilista, built in 1600.
Since 1800 Galzignano has been known for its thermal waters, starting from Bagni di San Bartolomeo (Saint Bartolomeo's baths).
In the locality of Valsanzibio there is one of the most famous greens in Italy, the “Golf Club Padova”. In addition to this we can find the beautiful and monumental Villa Barbarigo (17th century). This villa is very famous for its beautiful garden, one of the most well-preserved gardens in Veneto.